When it comes to compiling our annual year-end list of the places we’re most excited about in the coming months, narrowing down the field is easier said than done. We pore over press releases, tourism statistics, and our community top picks, restaurant debuts, and new flight routes. We consider the anecdotal evidence: Where are our friends and families going? What destinations are we seeing on Instagram? Which places seem to be part of today’s travel zeitgeist?

This year’s list spans the globe, from exciting southern hemisphere cities like Santiago, and Brisbane, to harder-to-reach regions like Langkawi, and the Danish Riviera. And, of course, there are the destinations that we haven’t heard much about, but certainly will soon — places like India’s Andaman Islands, or the art and the history-filled emirate of Sharjah, in the U.A.E., or the under-the-radar wine scene in Etyek, Hungary.

After all, isn’t dreaming about places totally new to us — and seeing old favourites in a new light — why we travel in the first place?

>> Traveling Solo – Don’t go anywhere without a Beacon – designed by women just for you! << 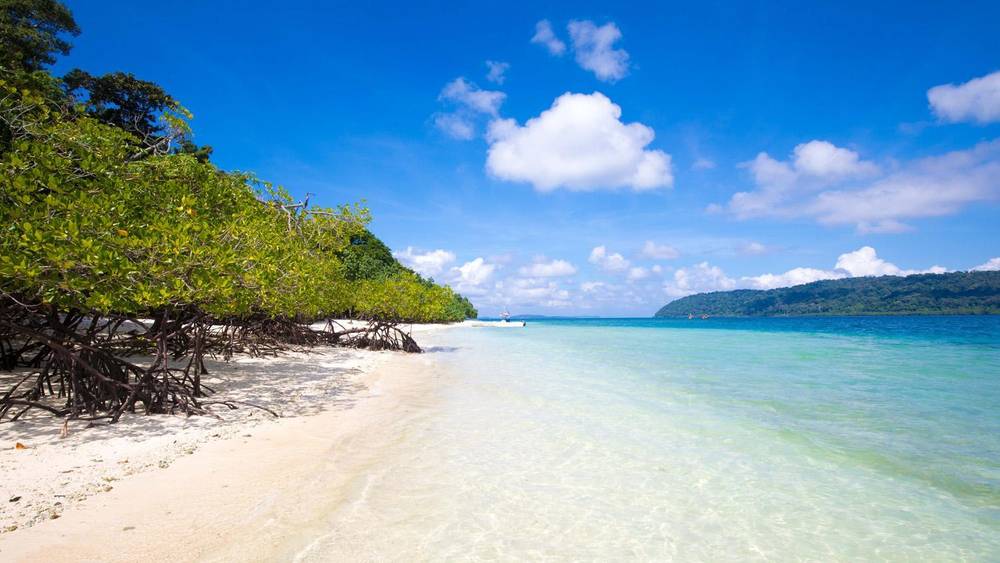 For anyone who’s ever fantasized about running away to a remote island, the Andaman Islands are the stuff of dreams. A chain of more than 300 islands (some sources cite as many as 572) strung between India and Thailand, they seem almost too perfect to be real, with unspoiled beaches, clear water, coconut trees, and tropical mangroves. Many of the archipelago’s islands are uninhabited or off-limits in order to protect the tribes who live there. But one, Havelock Island, became more accessible this March when Taj Exotica Resort & Spa — the Andamans’ first five-star resort — opened on Radhanagar Beach. Spread out over 30 acres, the property comprises 75 luxurious villas inspired by the huts of the indigenous Jarawa tribe, three restaurants serving local specialties and global cuisine, and the tranquil Jiva spa. It joins Havelock’s other main draw, the charming boutique hotel Jalakara, which opened in late 2015 with just three rooms, three suites, and a private villa on an old banana and betel nut plantation. Days here are spent swimming and diving amid the coral, kayaking in the mangroves, hiking in the forest, and relaxing on the beach. For now, the Andamans remain far less developed than the Maldives, Thailand, and Sri Lanka. Go before that changes. 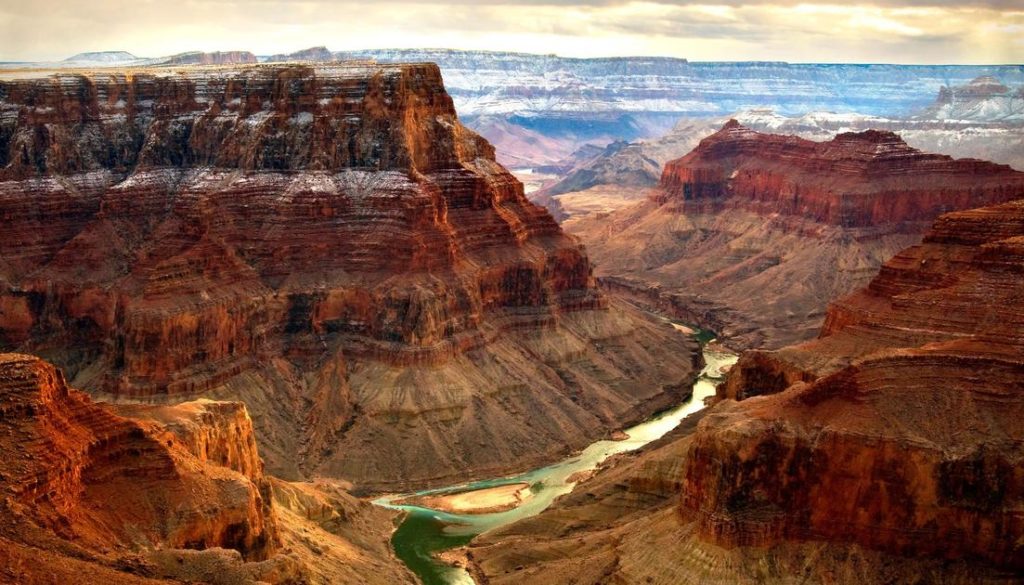 In 2019, the park dedicated to America’s most famous geologic marvel will celebrate its 100-year anniversary with a series of talks, concerts, and special exhibitions throughout the year. And while you can certainly have an awe-inspiring experience without venturing far from the designated lookout points, new tours make 2019 the ideal time to explore the Canyon’s less-travelled corners. Operator Austin Adventures has added more dates for its family-friendly Grand Canyon tour, as well as a brand-new itinerary that includes Bryce Canyon and Zion National Parks, while Tauck’s 8-day Sacred Lands: National Parks of the Southwest itinerary, created with help from documentarian Ken Burns, includes lunch on the canyon’s rim and two nights in an oft-overlooked section of the park. If you’d prefer a DIY adventure, plan a trip between May and October and head to the North Rim: less than 10 percent of the canyon’s 6.2 million annual visitors see this side of the park. With wild places both at home and abroad increasingly under threat, bearing witness to these natural wonders feels more urgent than ever. 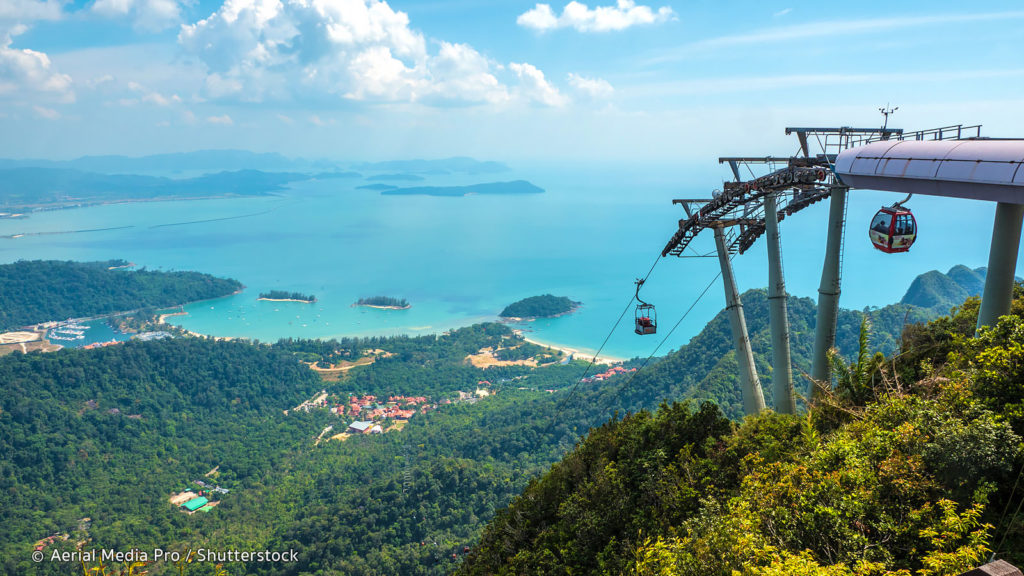 Langkawi, an archipelago of 99 islands, is poised to make Malaysia the next beach lover’s paradise. While much of the eponymous main island still feels vast and ageless — water buffalo graze in rice paddies, and street vendors sell flaky roti canai and curry for pennies — world-class resorts have arrived. The island’s only overwater spa is at the oceanfront Ritz-Carlton, Langkawi, where the 90 rooms and 29 villas are styled after a traditional village. The Datai Langkawi, situated on a peaceful half-moon cove, has undergone a $60 million, yearlong renovation that breathed new life into its guest rooms and villas. A canopy walk was built almost 50 feet in the air, to let guests better appreciate the surrounding rainforest. Thanks to a 2018 renovation, capacity at Langkawi International Airport has tripled, making the island more accessible than ever. 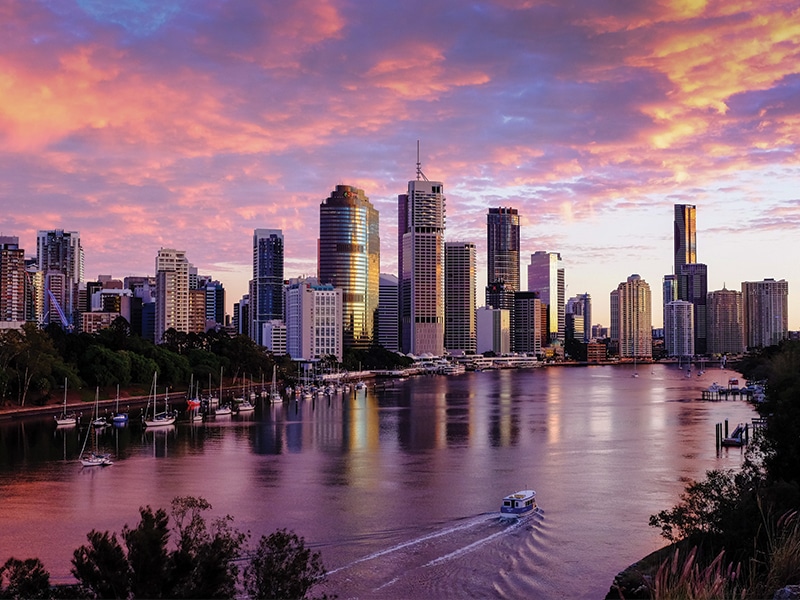 Teasingly nicknamed Brisvegas for its sleepy mien, Brisbane has long been regarded as an outsize country town, a cultural vacuum overshadowed by Sydney and Melbourne. But that’s changing. The shift began with the mid-2018 opening of the W Brisbane, the first luxury property to launch in the central business district in two decades. Now, the city is unveiling the $140 million Howard Smith Wharves development, which brings a hotel and restaurants to an abandoned dockyard under the Story Bridge. But even before the project is complete, this city, which hugs the Brisbane River, has plenty to offer. There are fine arts institutions like the Queensland Art Gallery/Gallery of Modern Art, or QAGOMA, where the vast Asia Pacific Triennial of Contemporary Art is on view through April. The Fortitude Valley neighbourhood continues to evolve, with the recent opening of the contemporary, white-brick Calile Hotel and the relaunch of the Hotel as the whimsical Ovolo the Valley following a $39 million upgrade. One thing remains unchanged: the Brisbane River is still the heart of it all, both a thoroughfare and a destination unto itself. The CityHopper ferry is a tranquil vantage point from which to see Brisbane’s parks, the cliffs of Kangaroo Point, and the ever-evolving skyline of this underrated city.

With its beach-meets-jungle coastline, splendid array of biodiversity, and climate as warm as the locals, it’s no wonder Costa Rica’s northwestern corner became an early paragon of ecotourism. That’s a lot of paradises to protect. Now, Guanacaste is ripening into a sanctuary for overtired humans, too. Liberia’s airport is fresh off a multimillion-dollar expansion while the luxury playground at Peninsula Papagayo is in the midst of its own $100-million refresh. Miami-based Gencom is bringing fresh dining concepts, an electric bike-share program, and thoughtful updates to both the Andaz and Four Seasons resorts (the latter’s reimagined spa is a destination in its own right). If the road less paved is more your brand of adventure, a stylish new boutique property, the 45-room Santarena Hotel, will open in February in car-free Las Catalinas, and small surf towns like Nosara and their year-round, world-class swells are as welcoming as ever, whether you’re a beginner or a pro on the board. 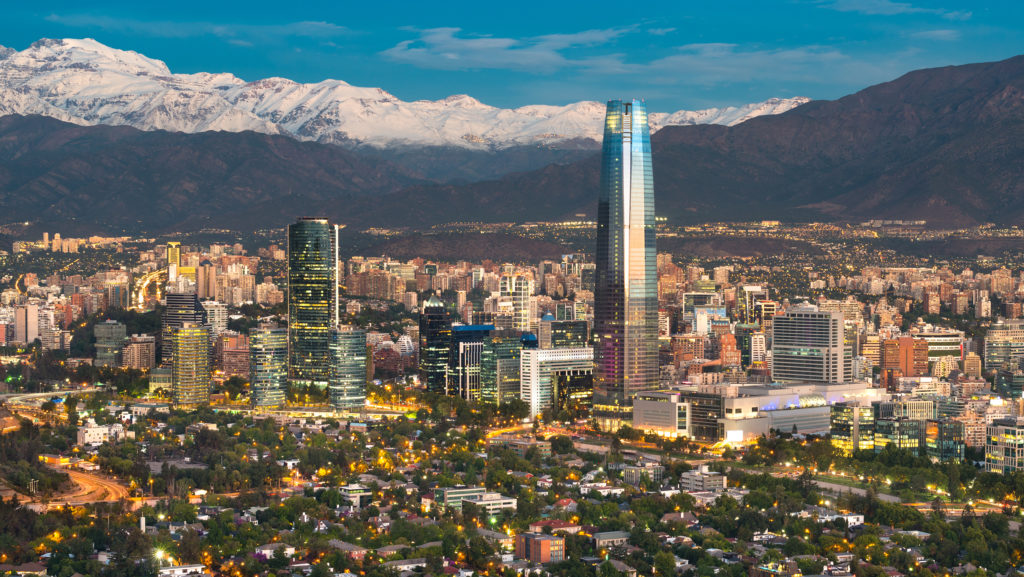 The Chilean capital has emerged as a playground for the food-obsessed, as pioneering restaurants like Boragó and Restaurante 040 have been joined by a new wave of boundary-pushing spots. Ambrosía Bistro serves internationally influenced dishes such as kimchi bao and short-rib tortellini. Find delicate plates — like a flower-blanketed nettle meringue in a pool of almond milk — at Sierra Restaurante, and haute cuisine with a sense of humor at De Patio. Even global stars have arrived: chef Mitsuharu Tsumura of Maido in Lima, Peru, opened Karai, a Nikkei (Japanese-Peruvian) restaurant in the W Hotel.

Tisvildeleje and the Danish Riviera 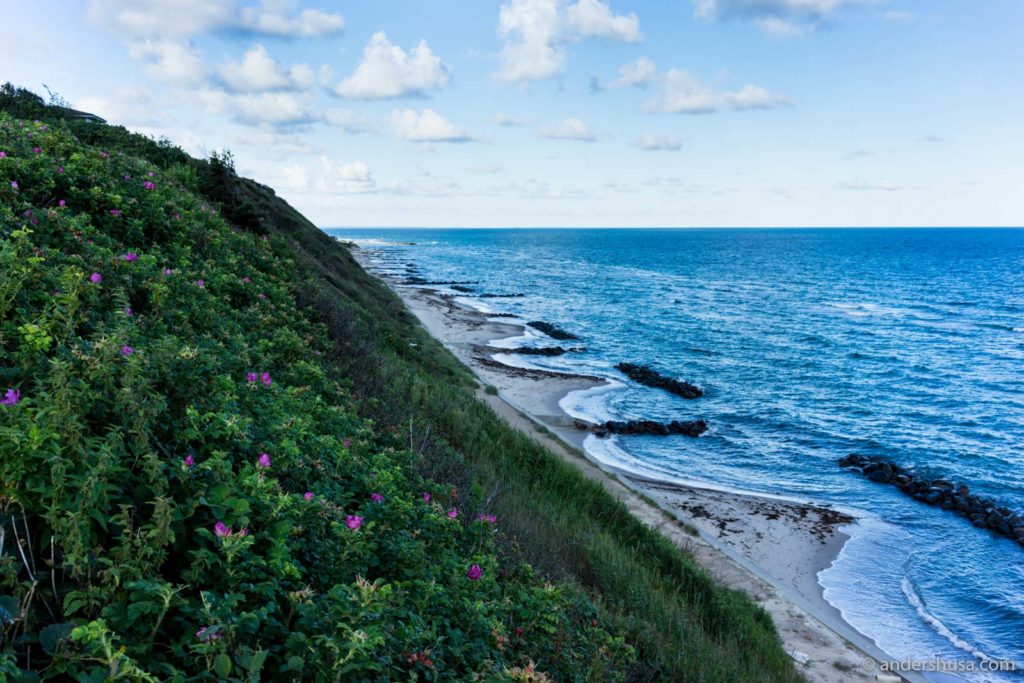 The Danish seaside village of Tisvildeleje has always had a cult following. In ancient times, it was a sacred site dedicated to the god Tyr; its spring drew pilgrims who believed its waters had healing properties. More recently, Tisvildeleje and the surrounding Danish Riviera have attracted urbanites who embrace the area’s rustic, unpretentious charms. The town is little more than the main road, lined with intimate restaurants such as the buzzy new Tisvilde Kro; a bakery, Brød & Vin; and tiny boutiques. The choicest stays are two reimagined 19th-century properties: the boho Tisvildeleje Strandhotel and Helenekilde Badehotel, a grand beach house with Midcentury Modern Danish furnishings and front-row views of the Kattegat Sea.

Madeira, a Portuguese archipelago famous for the fortified wine that bears its name, will celebrate the 600th anniversary of its discovery this year. Its terraced vineyards, atmospheric fishing villages, pretty pebble beaches, and the culturally-rich capital of Funchal have attracted the likes of Winston Churchill and George Bernard Shaw. Today, the “Island of Flowers” is luring a fresh set of adventure seekers with its warm year-round climes, dramatic landscapes (from dizzying peaks and black lava pools to laurel cloud forests) and a 500-mile network of UNESCO-listed levadas, or irrigation channels, that serve as scenic hiking and mountain biking trails. Come spring, a bevy of new and updated hotels will bloom, including Funchal’s new seafront Savoy Palace, featuring gardens, a spa and rooftop pool, and the sleek Les Suites at The Cliff Bay. The charming Pestana Churchill Bay Hotel will open in Câmara de Lobos, and Belmond Reid’s Palace will debut refreshed rooms and a glitzy new bar. 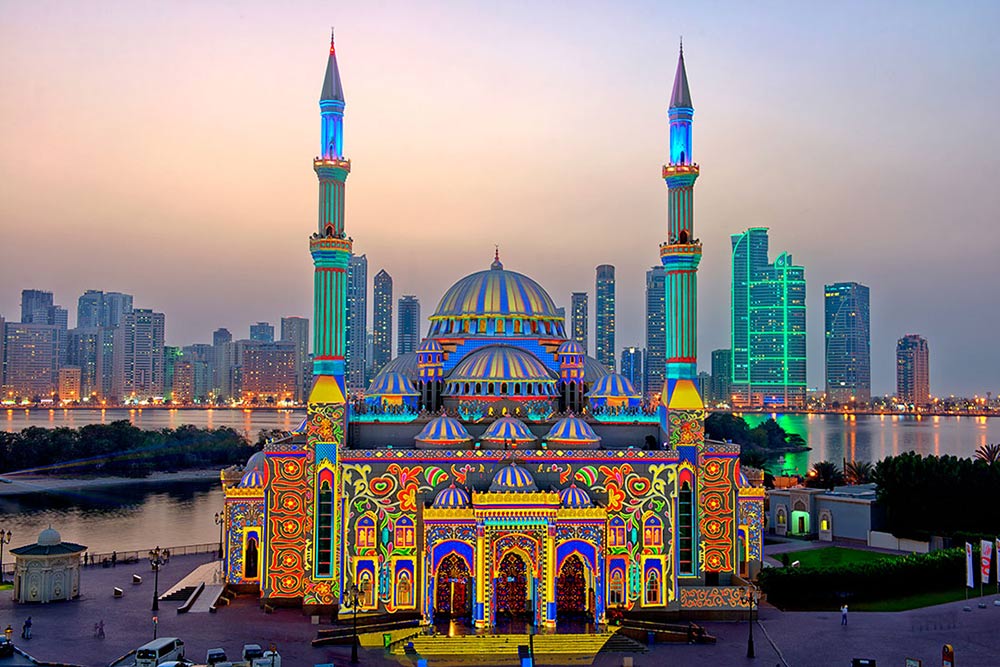 Abu Dhabi and Dubai are two of the most dynamic cultural hubs in the Gulf — but this year, it’s worth exploring another part of the country that’s quietly becoming an international arts destination. Sharjah, a small emirate whose urban center is just a 20-minute drive from Dubai, is home to some of the best-preserved heritage buildings in the U.A.E., plus a number of world-class museums, like the modern Sharjah Art Foundation. 2019 sees the 14th iteration of the Sharjah Biennial, as well as the first-ever Sharjah Architecture Triennial, the only event of its kind in the MENASA region. New hotels give visitors a refreshing alternative to the gilded glamour of the emirate next door. The 53-room Al Bait, in Sharjah’s old town center, was built from four historic residences. The hotel draws on the aesthetics of a traditional Emirati home and offers local culinary specialties like Arabic coffee and booza ice cream. In the Khor Kalba nature reserve, you’ll find the new Kingfisher Lodge desert camp, the first from new hotel group Sharjah Collection — it’s unique in the U.A.E., with direct access to Gulf of Oman beaches and a menu focusing on fresh seafood. 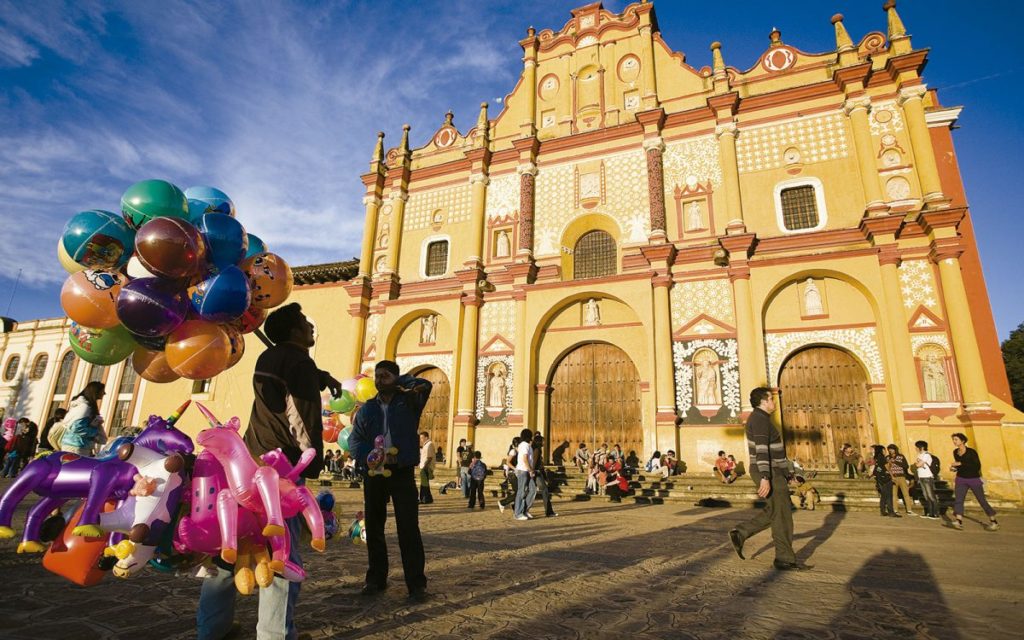 Set high in a mountain valley in the state of Chiapas, San Cristóbal de las Casas is not the easiest destination to get to — it’s a 90-minute flight from Mexico City followed by an hour-long drive — but the reward is a getaway in one of the country’s most picturesque colonial-era cities. One more reason to visit? Hotel Sombra del Agua, a stylish new property set inside a 1907 hotel (the first in all of Chiapas) and perfectly located just steps from the vibrant main square. The 70 minimalistic neutral-hued rooms were outfitted by buzzy Mexico City-based design firm La Metropolitana, and there’s a peaceful, plant-filled courtyard for sipping your morning coffee before meandering the city’s cobblestoned streets. The surrounding region is known for its rich culture and epic nature — and San Cristóbal is the ideal base from which to explore it all, with easy access to villages known for indigenous crafts like pottery and weaving, the lake-filled Lagunas de Montebello National Park, and the Mayan ruins of Palenque (not to mention countless waterfalls).