5 Epic Getaways You Can Rock In Just One Weekend 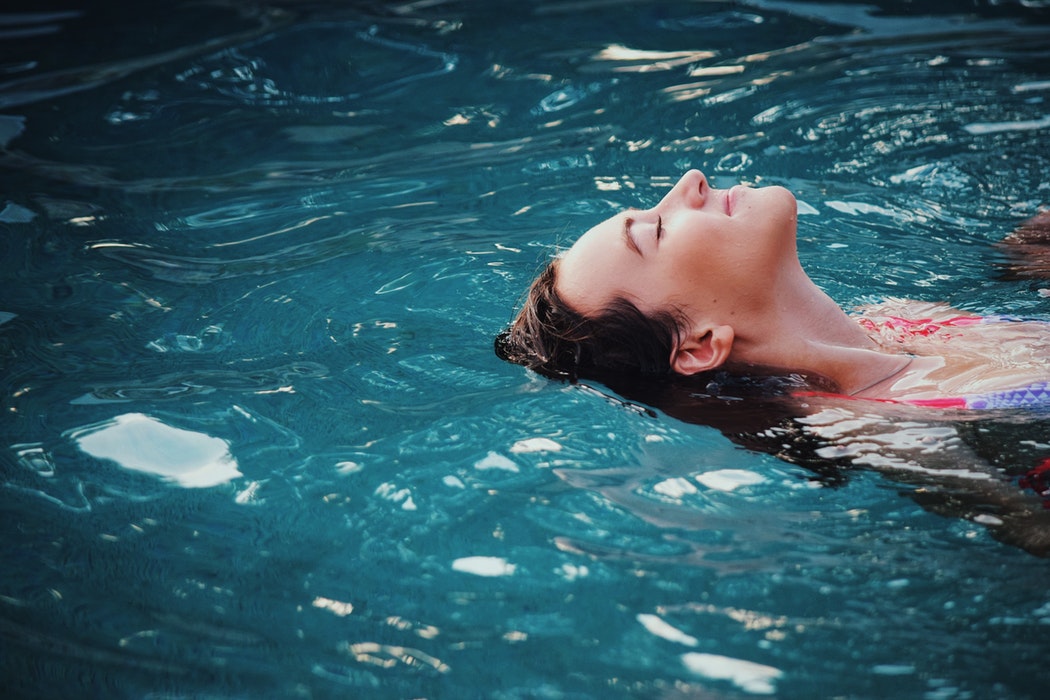 Traveling — like every other blasted thing in life — requires time and money. The best window most of us can hope for, most of the time is a long weekend away. Luckily, America is packed with great cities to spend a solid three days. And while you’re probably not hitting Tokyo or Beirut or Cape Town, there are a great many international destinations where you can enjoy a legit exotic escape outside the States in just three or four days.

These 5 cities are a quick hop from some of America’s biggest airports — so duck out early, beat the traffic to a flight at dusk, and enjoy the adventure and romance and exhilaration of a trip abroad. We’ll see you back at your desk on Monday!

Bermuda is an easy flight from the East Coast: two hours from New York, DC, or Boston; about three from Miami or Atlanta. Often you can get there for about $300. 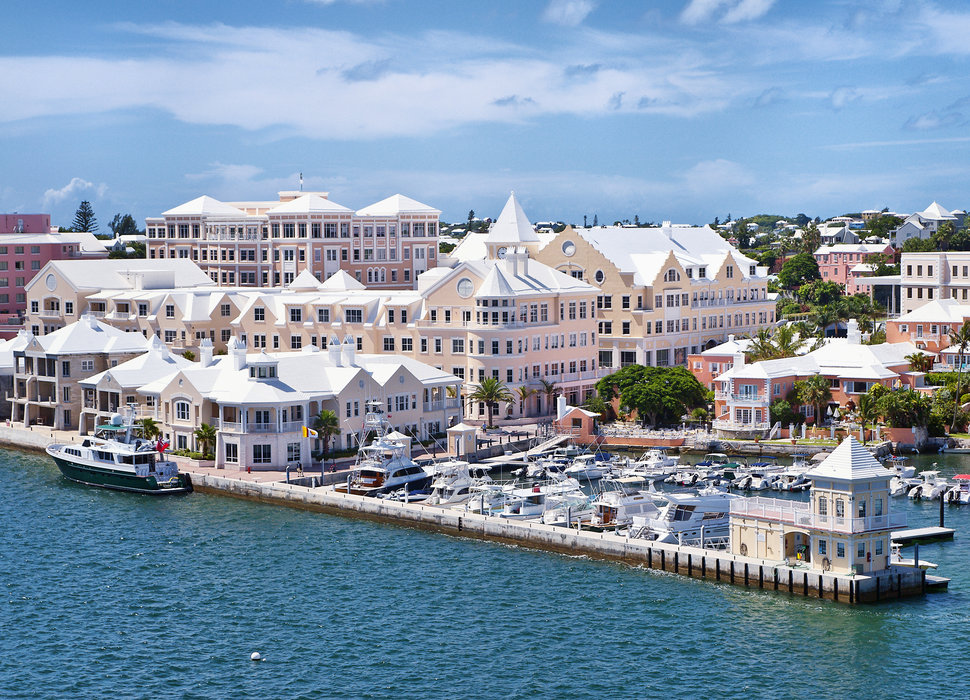 Bermuda is a weird bird. It’s not tropical, but it is warm and sunny and has pink sand beaches and sunsets over the North Atlantic. It’s also close, both geographically and culturally. Brits and Americans have been there since the days of pirates (it’s still a playground for captains of finance and their offspring), so you get gnarly old cannon-laden forts and a flourishing nightlife. You can ride a jet ski into the Bermuda Triangle. You can visit The Swizzle Inn for an iconic rum swizzle, and then seek out authentic local fare in St. George’s or drop some cash at Marcus Samuelsson’s chic eatery Marcus’.

Or, save your dough — even if you don’t want to spend hedge-fund-manager dollars, you can enjoy the same beaches. Or venture onto the bicycle trails, try a stand-up paddleboard, and walk around Hamilton’s Downtown. It’s quaint, relaxing, and a shorter flight home than some New Yorkers’ morning commutes

You can fly into Cancun in about four-and-a-half hours from LA, and just two hours from Houston or Miami. A round trip will probably run you less than $250, and the ferry from Cancun is only a few bucks. 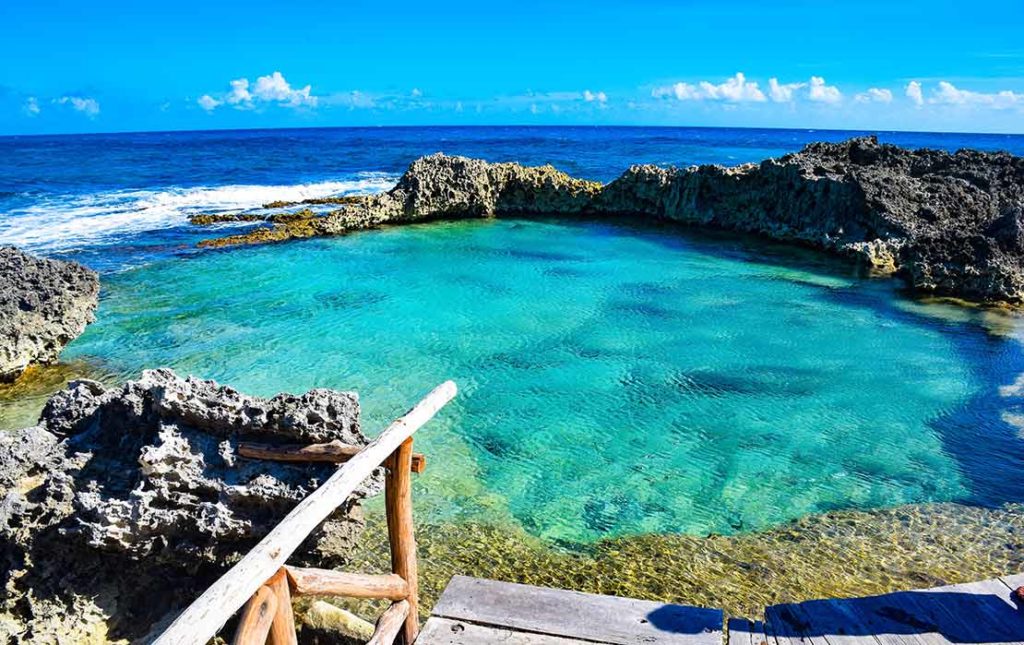 This island right off the coast is an excellent place to enjoy the things for which people go to Cancun without having to interact with the people who go to Cancun. The vibe is relaxed — this is where you go not to party for a weekend, but to laze. For a day at the beach, head to Playa Norte, where the waters stay waist-deep for probably as far out as you care to walk anyway.

Jaunting around Isla Mujeres via golf cart is a popular move, but if you’re willing and able, rent a bike or moped; the island is small and relatively car-free, so you shouldn’t have to worry about safety. Don’t miss the Underwater Museum of Art, which comprises 500-plus statues and sculptures that are, as the name suggests, underwater. You can view them from a glass-bottomed boat, or snorkel and/or dive your way through the collection.

Visit during the summer, and you’re in the planet’s optimal time and place for snorkeling with God’s most noble and mysterious creation, the whale shark. These gentle, school bus-sized creatures aren’t actually sharks, but rather the world’s largest fish. Though their migration patterns have stumped marine biologists for years, Isla Mujeres is where they’re most reliably known to turn up.

Direct flights from major airports will get you into el DF quick: 2.5 hours from Dallas, three hours from Miami, four hours from LA, five from NYC. Round-trip fare usually ranges from $300-$500. Or go all On the Road with it: From San Antonio, you’re a 16-hour drive away. 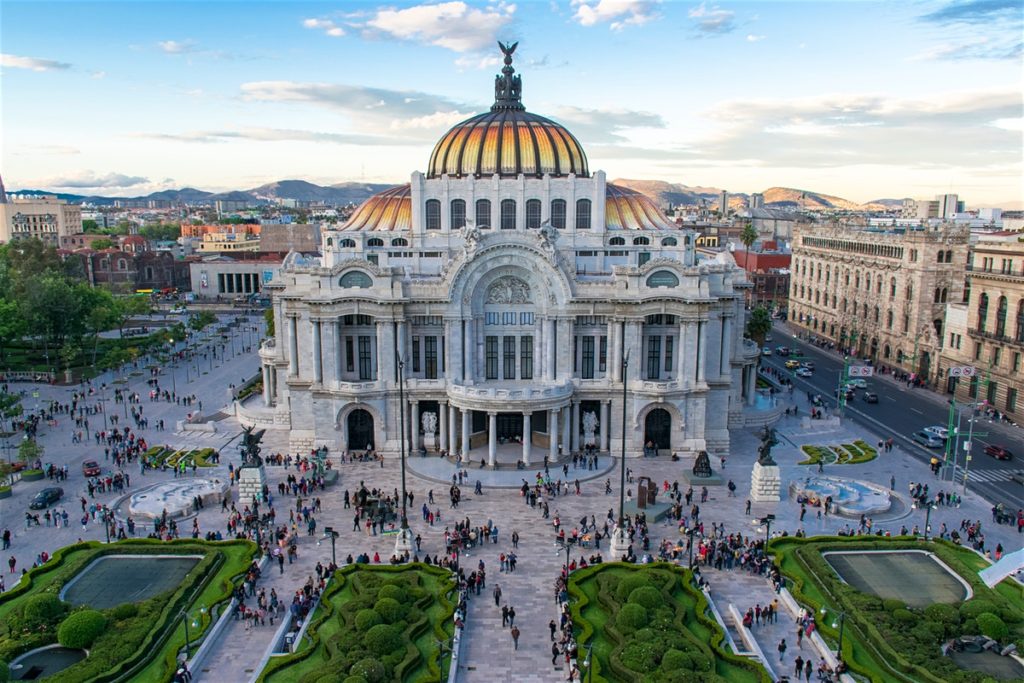 Anything feels possible here. Spend an afternoon wandering the tree-lined streets of super-trendy La Condesa or La Roma (like a Paris that rides the bus to work), and sip artisanal coffee while eavesdropping on local slang. Get cultured in the Centro Historico, where grand colonial buildings and churches tower over the electric, modern murals that line the alleys. The top draft choices among the 150 museums in the city are the stunning Museum of Anthropology and the Casa Azul of Frida Kahlo. Do ‘em both.

At night, the city comes alive — as will you, when you sample pulque (a traditional, fermented agave drink, flavored with strawberry or celery) and befriend the mariachi band busking on the sidewalk. Get a midnight snack of the capital’s renowned tacos al pastor, then stumble off to dance until the sunrise. Don’t forget a day trip to the epic, pre-Hispanic city of Teotihuacan, where climbing the steep steps of the ancient pyramids will leave you eager for a long lunch in a restaurant in the desert: right next to a cactus farm.

Flights to Belize City are quicker than you realize from huge hubs like DFW, Atlanta, and Miami (three hours each) or Houston (2.5 hours). Tickets from those cities can get down under $300; if you’re connecting, you’ll pay a bit more. 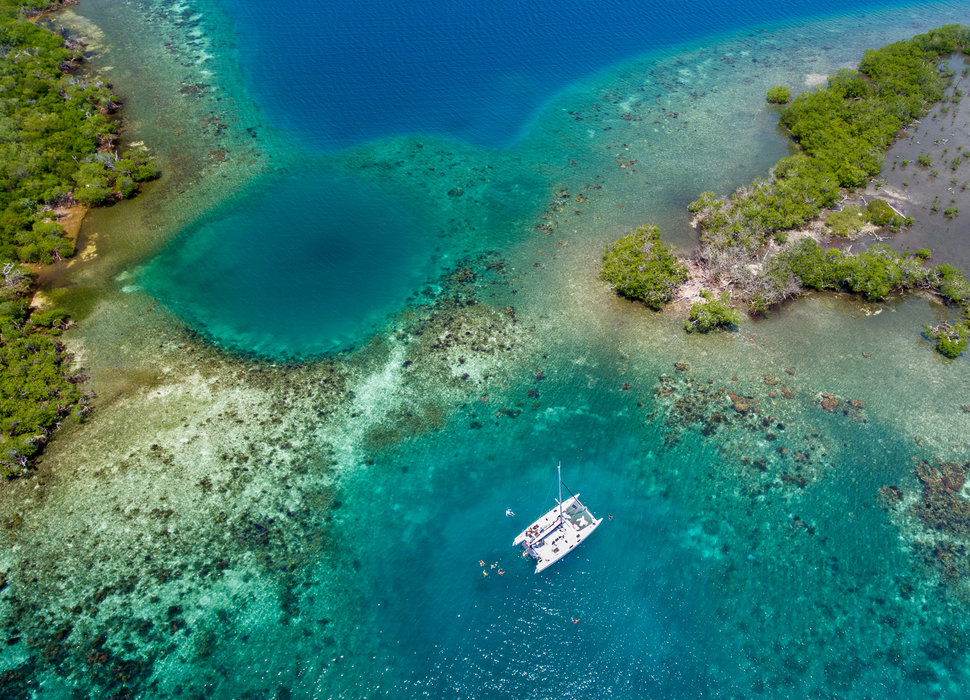 Lush tropical rainforest, check. Ancient Mayan ruins, not bad. Those cayes, though. This little country on Mexico’s knee has more than 200 small islands that roll out some of the clearest turquoise waters and blindingly white sand you’ll ever see. For roughly the cost of your flight, you can do it up Johnny Depp-style and Airbnb an entire island for the weekend.

If you’d rather mingle with locals, and maybe drink your weight in daiquiris, the most popular choices are Ambergris Caye and Caye Caulker. From there you can take a short boat ride out to the world’s second-largest barrier reef to snorkel with a mind-boggling variety of stingrays, sharks, and fish. The Great Barrier Reef is bigger, but we can tell you from experience, Belize is better. Close the day with Caribbean vibes, jerk chicken, coconut rice grilled on the beach, and ask yourself how you’ve lived this close to paradise without ever finding time to visit before.

If you’re in Miami, great because a direct flight is just an hour and a half. From Chicago or New York, it’s under four hours. A round trip will run probably $300 to $550. Aim for March or April, the sweet spot when hotel rates drop but the rainy season hasn’t quite yet kicked in. And keep an eye out for more of those Southwest deals. 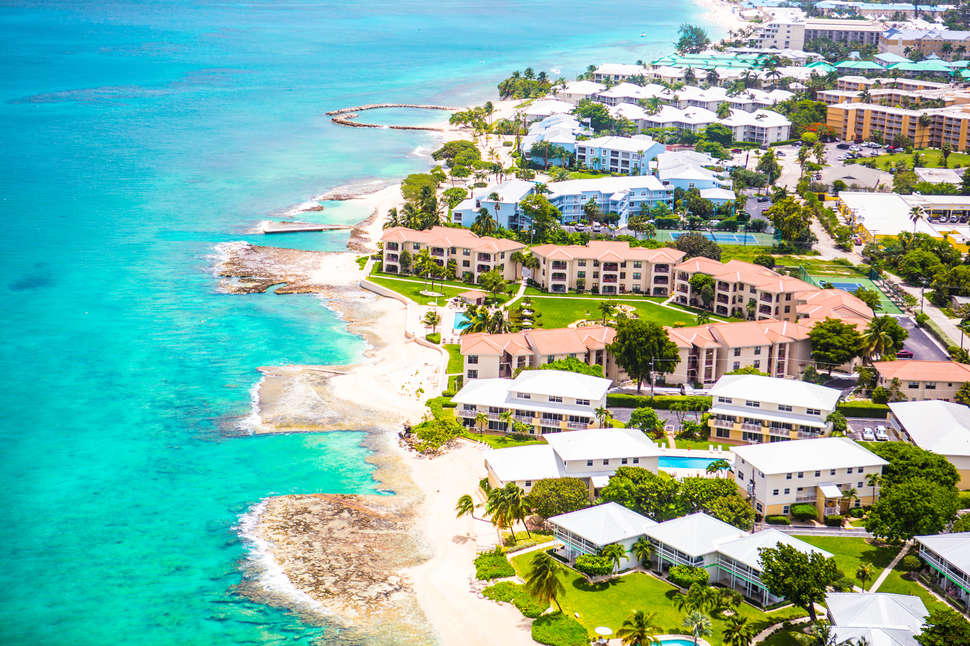 he Caymans are three islands, each with a different vibe. On a short trip, you’ll get the most out of your time on Grand Cayman, the largest. Visit the Cayman Turtle Centre to swim with sea turtles (and learn about local marine life). For a smokeshow beach, which I’m going to assume is one of your higher priorities, head a few minutes south to Seven Mile Beach. Maybe feed a stingray while you’re there.

Not really an ocean person? That’s cool — you can go to Hell, a surreal landscape of black limestone. It’s free, though it’s worth paying a small fee (meaning a gratuity) for a guide to give you a more thorough experience. Keep walking, if you must, on the renowned Mastic Trail, which cuts through a rad a nature preserve. If you can make it during the first week of May, you can catch the annual Carnival festivities, known here as Batabano. And definitely don’t go back home without sampling the world-class jerk chicken. It’s ubiquitous, but East Ender’s is a cut above.